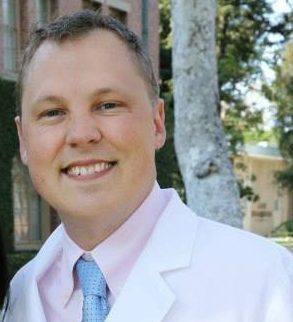 Dr. Golchert hails from Milwaukee, Wisconsin, but has happily called California home since he arrived  following high school. He attended CSU Sacramento, double majoring in chemistry and biology. From  there he travelled south to UC Irvine where he obtained his MS and PhD in analytical chemistry,  successfully defending his thesis on the biophysical characterization of an eye lens protein involved in  cataract formation. After teaching chemistry locally in several Southern California colleges, he became  interested in dentistry through his wife who had just graduated from the venerable Herman Ostrow  School of Dentistry of USC. He followed her there, and has never looked back. After finishing dental  school, he joined a General Practice Residency program at the Loma Linda VA. Having developed a  great appreciation for the art and science of root canal therapy, he attended UC San Francisco where he  was awarded his dental specialty certificate in endodontics. Dr. Golchert enjoys spending time with his  beautiful wife, young son, and tiny dog — taking time to search out and savor the Bay Area’s coffee and  restaurant scene. He also enjoys golf, if and when he can find the time to play.